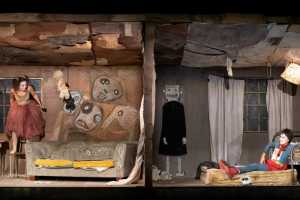 Not for nothing have opera-lovers been warned that this version of Humperdinck’s fairy-tale-inspired opera is a far cry from charming, innocuous entertainment. Not for nothing does the surname of the brothers Grimm suggest that they were grim by name and grim by nature.

There is an oneiric quality to the plot of Hänsel und Gretel, more nightmare than dream, that is exploited to the full by director Talevi for Cape Town Opera’s current production.

The dulcet overture, delicately rendered by an orchestral ensemble under the baton of Kazem Abdullah, gives no inkling of what is to follow: a grotesquely staged farrago of squalor, filth, poverty, child abuse, cannibalism and sexuality bound together with a bleak humour worthy of the Dadaists. Theatre of the absurd meets kitchen sink realism to disconcert the audience, but to what purpose? It’s not exactly original…

On the other hand, this outré presentation is redeemed by the high calibre of execution from both vocalists and musicians, who bring impressive proficiency and commitment to their delivery. The beauty of performance from the singers counters their clownish makeup and repellent costumes to ear-enchanting effect. 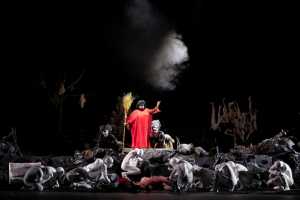 Pretorius and Smith have built handsomely upon the success of their earlier partnership in I Capuleti e I Montecchi, when they played Romeo and Juliet: their voices are well-matched and their chemistry is palpable. Both are in excellent form.

A stellar contribution to this production on opening night came from Bongiwe Nakani as the Witch. She appears to relish every moment of her role; sinister, ingratiating, playful and vicious, she is the epitome of evil gifted with a voice a Siren might envy.

Seldom if ever does Janelle Visagie disappoint, and here she brings her habitual prowess to the role of the Mother, injecting unexpected vulnerability into a despicable persona with full-throated sweetness of delivery.

Martin Mkhize as the siblings’ amiable Father handles his credible reading of the role with understated but powerful authority. Worthy of mention is Ernestine Stuurman for her winsome cameo of the Sandman who lulls the exhausted children to sleep in the…no, not the forest, it’s a decaying rubbish dump. This singer’s physical agility matches that of her voice as she coaxes the pair into the Land of Nod. 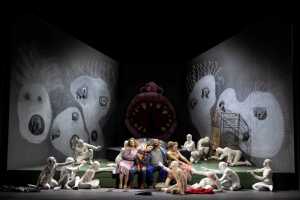 Of these, the most evocative has to be that of the Witch’s gingerbread house in which disembodied arms entice the starving children to appease their hunger with sweetmeats, then morph into fetters that hold them fast – a graphic image of addiction.

Love it or loathe it, this staging of Hänsel und Gretel is not likely to be forgotten soon. Eviscerating the bourgeoisie is far from new, but beyond that cliché is the quality of performance, all the more remarkable given the multiple challenges of rehearsing under Covid-19. THAT is new. And admirable.